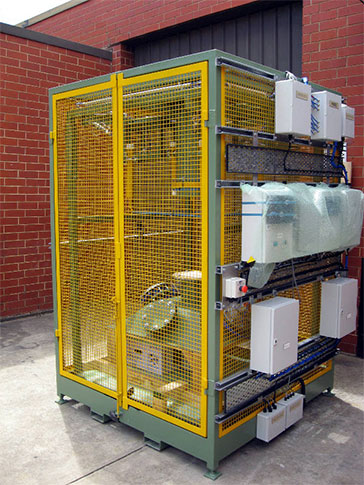 The new bulk bagging systems for rutile and zircon were based on a Flow Force design installed and operating successfully in WA since 2000. New PLC and operator touch screen facilities were added to provide a compact but convenient and economic operator interface. Some of the features of the new bagging system are discussed briefly below:

Automatic bag inflation and dust extraction were added to simplify operator involvement and speed up the bagging process.

It takes a fair bit of “puff” to inflate a cubic metre of bag so a pneumatically operated 50 mm diameter air valve was selected for this duty. The valve was mounted on one side of a dust hood on the top section of the bagging frame. A pressure sensor located inside the dust hood was used to detect the air pressure and signal to the PLC accordingly. The PLC controlled the opening of the air valve via an air pressure regulator and speed controller so as to:

When bag inflation is complete the filling process can begin provided the dust extraction valve is open. The air in the bag will of course be displaced by the filling process and take some dust with it so the design allows for the free passage of air/dust up through a cavity provided around the filler pipe and into the dust hood and out through the dust extraction valve. A pneumatically operated 150 mm butterfly valve was used for this duty. The valve actuator was controlled by the PLC via a solenoid valve and the valve open and shut positions were detected by limit switches.

A sampling device was included in the bagging system to sample the mineral as it falls from the supply bin to the inlet of the bagging frame. The sampler was a Flow Force sweep – type stand-alone sampler with pneumatic actuator controlled via a 2-position solenoid valve by the bagging unit’s weight controller, a Flow Force XP Controller. The XP Controller ensures that sampling only occurs during bag filling and also allows easy adjustment of sampling intervals.

The bags were weighed using load cells supporting a weigh platform on which a pallet and empty bag have been placed by the operator. (The bag’s corner straps have to be attached to support hooks and the bag neck has to be placed around the filler pipe).

The platform together with the pallet, bag and bag support frame are all weighed with reference to an outer support frame onto which are mounted the dust hood, sampler, control cabinets and all ancillaries (eg access doors etc).

The platform is equally supported on 3 shear beam load cells located so as to avoid any un-balance in the event of uneven mounting of the main support frame.

On detection of the pre-selected weight (minus a value for in-flight weight) the XP Controller shuts the client’s feed valve and disconnects the bag from the bag support hooks and bag neck clamps.

The powered actuators that control the bag support hooks and bag neck clamps are controlled by 3-position solenoid valves. The third position allows control air to be disconnected from both ends of each actuator so that the controlled device (eg support hook, neck clamp) simply hangs loose under gravity; thus posing no threat to the operator when disconnecting the full bag and positioning the new empty bag. This third position is activated whenever an access door is open.

Movement: The weigh platform was clamped down (with purpose-designed clamps) to the main support frame to prevent the platform from jumping off the load cells during transportation between Australia and Africa.

Size: The size of the bagging unit was too big for a shipping container so it was necessary to ship them in specially made wooden close-jointed crates. The internals of the crates had to be lined with moisture-proof tarred paper (to prevent moisture ingress in case of rain or sea-spray). The crates also needed special strengthening to prevent flexing during loading and unloading. To reduce height the dust hood was secured onto the weigh platform for shipping.

Pre-verification of conformity to the quality and safety standards of the importing country was an issue between us and another inspector (a multi-national inspecting agency engaged by the government of the importing country to inspect all goods to be imported into their country from anywhere in the world). On the face of it, this also could have been an inspection nightmare! The listed codes of all the types of goods requiring inspection was in the vicinity of 500 but none of them actually fitted our bagging system. So we compromised on one code that was close enough for the purpose (with some qualifications). However the event, when it finally took place, was quite satisfactory, thanks partly to an “inspector-from-heaven” and partly to our own diligence with the necessary paperwork.

Training of our African site engineer took place in Adelaide in March and now we look forward to site commissioning probably in August this year.

Recent trials by a leading global producer of beverages have shown that the MAGNE//FLO™ impact weigher copes well with starch. The use of the MAGNE//FLO™ as an in-line solids flow meter allows accurate batch ...